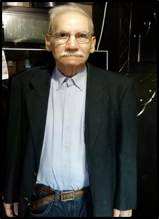 IN HIS many decades of involvement in chess Andre van Reenen was regarded as a strong mover and shaker in the fight against supporters of apartheid laws and norms.

In a far-too-short pen-pic in a chess publication of a few years ago, Van Reenen was described as someone who had…

• Been involved in chess for more than 50 years;

• Played a huge role in forming chess clubs on the Cape Flats;

• Started forming chess clubs in District Six after the forced removals of the 1960s;

• Formed the black WO Chess Association in the 1970s.

But this didn’t tell half the story of his journey via chess in a country with rulers besotted with apartheid. In 1966, he was the central figure in a saga that caused half the members of the False Bay Chess Club to resign. It followed a unilateral decision by the False Bay’s top official to accept him as a member. As far as rank-and-file members of the club were concerned it was a case of each colour to his or her own.

The contention that racially separate clubs could compete against each other without incident was disproved repeatedly. A series of racial incidents reinforced the argument, especially after the advent of SACOS – that normal sport was impossible in an abnormal society. Following the countrywide protests in 1976, increasing numbers of black clubs began affiliating to Van Reenen’s CAPSA.

Van Reenen worked energetically for the isolation of white South African chess from the mid-70s onwards. Having read about International Arbiter Jerome Bibuld’s opposition to racism in the world, but particularly to apartheid, Van Reenen wrote to Bibuld.

It was the beginning of a long association in which Bibuld agreed to become the patron of the SACA, and later for the CAPSA. He also represented CAPSA at meetings of the international controlling body for the game, FIDE.

Bibuld was a huge barrier to white South African efforts to have an international ban lifted, insisting this would only come about once freedom had been attained for everyone in South Africa.

Although no longer involved in national and international chess, Van Reenen has maintained a strong interest in community chess, especially in the Bonteheuwel township.