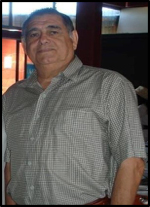 BOBBY PROCTOR – A SPORTSMAN WITH A MAGIC TOUCH

IF GREATNESS in a football team is measured by the looks of awe on the faces of the older generation of fans when discussing professional football in the late 1950s and early 1960s, then Cape Ramblers must have been very special indeed.

And when reminiscing about the stars of that side, the name, Bobby Proctor, is mentioned as often as a mouthwatering lineup of other stars – Wally Boonzaaier, Vince Belgiums, Coenie Stuurman, Ivan Dagnin, Challa Links etc.

And although Ramblers, launched to great fanfare in 1958, was a team that shone brightly, but far too briefly, many older fans still rate them as Cape Town’s greatest ever professional team, greater even than the Cape Town Spurs side, managed by Don Richards in the late-1970s and early 1980s.

And yet, as far as footballers go, Proctor began playing the beautiful game at club level at a relatively mature age.

By then, his talents had been noticed – and he was called up the Alliance FA selectors into their board team.

On a bigger stage, it was inevitable that bigger things were in the offing for him – even apartheid would deny him the ultimate honour of playing for his country.

Next best, and under the circumstances, an excellent alternative, was football in the professional ranks….

‘In 1961, I was signed by Cape Ramblers, with whom I stayed until 1963. I then returned to the amateur game, playing board football for the Western Province FA,’ he says.

And then injury struck – and Proctor was forced to quit football. But he quickly proved that there was sporting life after the game he loved.

A switch of codes followed. He joined the Belmont Hockey Club, and it was if he had been playing the game all his life. His natural talent saw him being selected for representative games for the Western Province Union.

During his stint in hockey, he began a new chapter in his life: administration. ‘I served the union as its secretary for seven years, he says.

The next game he excelled in was darts, in the non-racial Western Province Darts Union. Here, he also did his bit on the administrative side of the game, serving the union as its match and registration secretary, and as a delegate to the Western Province Council on Sport (Wepcos).

In 1988, he started playing bowls, and was president of the Victoria Bowling Club for five years.

But all good things must eventually come to an end, and Proctor says: I retired from all sport, including administration, in 2012, at the age of 75.’