There never ever was an athlete quite like Cecil Blows

Cecil Blows was a phenomenal sprinter who showed all-comers a clean pair of heels over the two short distances. He was also a long-jump winner and a mean hockey player to boot.

Cecil was the national sprint champion over the two short distances on eight occasions in the late ’50s and early ’60s.

In the late Sixties when rising star Kenny Roman started testing him, Blows could still put on the after-burners and leave him in his wake.

Blows first came to prominence in 1958 when, as a 17-year-old, he beat Willie Pick, one of the hot favourites for the sprint title in an Andrewena Cup meet at Green Point Track.

It was the beginning of an athletic career that lasted into the Seventies and even though white South Africa tried to entice him into a match-up with their sprint stars, Blows stuck to his principles and rejected racist sport.

He also had a long stint with the Mocambo Hockey Club which he joined in 1962. Blows was also a qualified teacher.  He started teaching at Wittebome in 1962 and is still educating and mentoring the stars of tomorrow to this day. 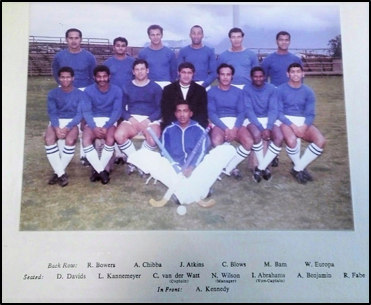