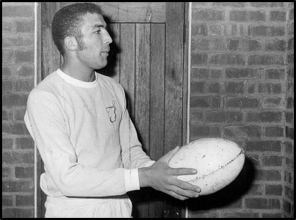 IN THE 1970s, one of non-racial rugby’s greatest coaches, Millin Petersen, rated Clive Thomas, a backrower from the Tygerberg Union as one of South Africa’s greatest No 8s.

The admiration – of one for the other – was mutual.

“The late Millin Petersen was up there with the best,” Thomas said many years later, while reflecting on his own playing career, which was short but impactful at the highest level, but which gave enormous pleasure to all who supported the non-racial cause, and who admired skilful rugby.

“Millin was tremendously knowledgeable. In fact, let me put it this way: he ate up knowledge. He read profusely about the game, but he did not only gain his knowledge from books. He also contacted and shared ideas with some of the best overseas coaches of that time.

“He, together with Attie Booysen, another Tygerberg coach, and the father of Donkie Booysen [who went on to make his mark in other areas of society] were my biggest inspirations at senior rugby level.”

It was almost inevitable that Thomas would play rugby . . .“I was born in the tiny rural town of Bredasdorp,” he said, “and in our community, the only avenue open to the sports-minded was rugby.”

Encouraged by his father, Conrad, he began playing at primary school. Then, when he went to Harold Cressy High School in Cape Town to continue his education, he was encouraged by another inspirational figure in his life, Yusuf Jakoet, to try out for the scrumhalf position.

He made the spot his own before shifting to No 8 later in his school career, and quickly began making a name for himself against opposition such as Trafalgar, Roggebaai and Oaklands High.

Club rugby was his next step up – and it began at City Park, while he was still at high school. “While at Cressy, I boarded with my uncle, Ronnie Davids, a stalwart with the Universals club,” he said.

“I was roped in to play for them, but they were not very good, and their results were poor, mainly because they struggled to fill their teams. Being young, I found myself having to play two and, sometimes, three games on a Saturday.”

Things improved when Meltons, an Elsies River-based club, broke away from the Federation-affiliated WP Rugby League and linked up with Universals at City and Suburban, he said. “They had some good players, and I liked their attitude and style of playing,” Thomas said. “When they returned to Elsies River to help form the Tygerberg Union, I decided to go with them,” he said. It was here that he met Petersen.

The lack of facilities was a major problem in those days. Because the Tygerberg Union was part of the Sacos-affiliated SA Rugby Union, the white authorities openly favoured clubs that were part of the WP Rugby League.

“But we survived – and thrived. Our top players got better and better under the guidance of Millin and Attie Booysen,” Thomas said. “With skills and fitness our bywords, we played some of the best attacking rugby in the SA Cup competition.”