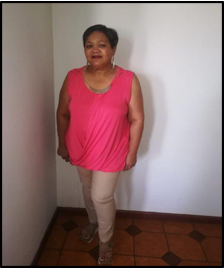 CONNIE BOLTMAN – THE SPEEDSTER FROM STEURHOF

FROM the long list of heroes in South Peninsula High School’s athletics hall of fame, a speedster named Connie Boltman (now Blaauw) was, perhaps, the greatest.

Although not the tallest of athletes, she was blessed with a blistering turn of speed that saw her beat off the challenges of all-comers at WP Senior Schools Sports Union level throughout her high school career.

Many people say the potentially great make their own luck – and then work on it. This is what Boltman did – as a Sub A (Grade 1 in today’s parlance) pupil at the St Luke’s Primary School, near her home in Steurhof.

‘I was watching older athletes doing high jump,’ she explains.

‘Having been taught to ask in order to receive, I asked Sidney Nefdt, the schools’ athletics coach, if I could also jump – and he agreed.

‘I easily cleared the (then) rope – and he became my greatest inspiration,’ she says.

‘It was through his encouragement that I was selected as an under-11 athlete in the WP team that took part in the first SA Primary Schools championship in Durban in 1965.

‘I won the high jump. I also began making my mark as a sprinter, and Mr Nefdt continued to show great interest, accompanying me to all WP championship meetings.’

Boltman’s achievements at primary schools’ level were phenomenal and they included the South Peninsula Schools Sports Union Victrix Ludorum for five years in a row.

With SP within walking distance of her home, it became her choice of high school. ‘Athletics was the most popular sport at the school – and I was inspired by the interest shown by teachers and fellow pupils,’ she says.

‘I always strove to do well.’

No one could match her at SP inter-house meetings, but what about at inter-schools’ level?

‘My greatest rival in the 100m was Marlene Johannes of Elsies River High,’ she says. I was so determined to beat her (and it was the first year they participated in the A section) that I broke the record that had stood for nine years.

Boltman was a member of provincial teams in 1968, in Durban; in 1970, in Johannesburg; and in 1972, in Cape Town, where she was named joint captain of the team (with John Hendricks).

More recently, she made her mark as a contemporary and aesthetic dancer, participating in two world gymnastradas (in Germany and Switzerland) and in the Gym For Life World Challenge in Cape Town in 2013, in which her team won a silver medal.