DAVID ISAACS – WHEN HARD WORK AND DEDICATION IS REWARDED

DAVID Isaacs’s journey into bodybuilding was sparked by an advertisement in an American comic book.

‘In the ad, Charles Atlas promised those who bought into his programme a “he-man’s” body in seven days,’ says Isaacs, adding: ‘These were words of inspiration for me.’

‘At the age of 18, I weighed only 50kg. But ten years later, when I competed in the Mr Universe competition in London, I had bulked up to 112kg.

‘It wasn’t easy. I trained with weights – six times a week, for three hours at a time. And supporting me every step of the way was my mother, my rock.

‘From Uniondale in the Little Karoo, she had come to Cape Town to char for white people and was determined I should have a better life.’

Once the bodybuilding bug bit, Isaacs hooked up with others who shared his love for the sport. ‘There were six of us, but only one set of weights,’ he remembers. ‘But we did not let that get us down. We weren’t allowed into white gyms – and there were no gyms for black people,’ he points out.

‘But, again, we refused to be discouraged. We trained in backyards, in the open air. Later, we started building sheds – “hokkies”, as they say in the townships – in our yards.’

‘We started a club, – Oakdale (after the oak trees of Newlands in which we all lived). And as our finances improved, we bought more weights and other essentials such as protein powders from an entrepreneur named Jack Lunz, who ran a small business selling bodybuilding supplies out of Barrack Street in Cape Town.’

According to Isaacs, Oakdale became the top bodybuilding club in Cape Town – and one of the best in the country. 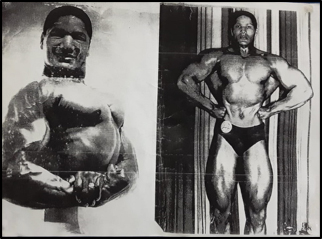 In 1966, Isaacs competed in the Mr Universe competition, with 130 competitors from 30 countries. The competition consisted of four divisions – tall, medium, short and professional. He competed in the ‘tall men’ section, with the likes of future actor and politician Arnold Schwarzenegger. ‘I did very well,’ he says.

Later, he completed in the 1969 edition of Mr Universe, as well as in Mr World and Mr International competitions.

A firm believer in ‘paying forward’, Isaacs is involved in training more than 150 aspirant bodybuilders at a gym in the old Hewat Training college in Crawford. Training takes place from Mondays to Fridays, and the boys come from all over.

‘It is my contribution to society,’ says Isaacs, who makes the journey to the gym every day by bus from his home in Heideveld.