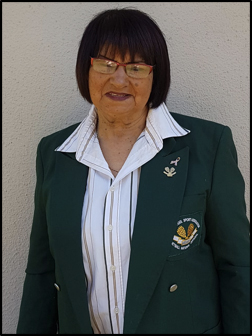 If anyone were to be asked what made school sports run smoothly when it did back in the day, the answer would invariably be ‘it was down to the dedication of a few committed individuals’.

One such person was Doreen Slingers. She was a top sports administrator who saw to it that things got done, particularly in schools sports.

She was one of the driving forces in schools’ athletics, netball and aquatics for decades.

But, first and foremost, Doreen Slingers was an educator.  She dedicated her working life to seeing that young learners were taught the basics, which would stand them in good stead later in life.

But the time she finally called it quits, Doreen Slingers had a list of achievements that could fill a book.

As part of the Western Province Primary School Board, she was the netball convener for 20 years, its treasurer for 17 years until its dissolution in 1994, an athletics coach, a qualified athletics official,  (including chief recorder and scorer), and a qualified aquatics official.

She was the Netball Schools chairperson for 20 years and athletics manageress at provincial level as well as being the chef de mission for the multi-coded WP team in 2012.

At the national level, Doreen Slingers was prominent in a number of roles.  She was the national coordinator for the SA Primary Schools Association, the manageress for SAPSSA manageress, the SA Schools netball secretary and deputy president, as well as drafting a netball coaching manual for SAPSSA that was circulated throughout the country.

Doreen Slingers also had a number of leading roles on the international front.

She was the chef de mission for the multi-coded tournament organised by the Confederation of Schools Sports Associations in Southern Africa.  She conducted a netball coaching course in Namibia and was manager of the under-16 netball national team to Zimbabwe.

She also headed the delegation of the SA under-19 netball team to the United Kingdom.