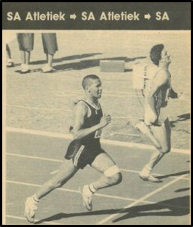 EDMUND LEWIS – ‘THE FINEST SPRINTER IN THE COUNTRY’

TWO athletes named Lewis … one an American, the other a South African. Both were black. Both were sprinters. Both were undeniably good. And that’s where the similarities ended….

In 1984, the American, Carl Lewis, won four golds and a silver at the Los Angeles Olympics. In the same year, the South African, Edmund Lewis, raced to victory in the 200m at the SA Amateur Athletics Board (SAAAB) championships at the Vygieskraal Stadium. The year before, in Durban, he had won both the 100m and 200m events in the SAAAB championships.

But there was to be no Olympics glory for him. No testing himself against the best in the world. His problem was that the country’s whites-only government did not regard him as worthy of representing the country of his birth. The Olympics Brotherhood, in turn, refused to allow a country that refused to treat all its citizens as equals to compete against other nations of all colours and creeds.

So, all Edmund Lewis could do after each victory in South Africa was wonder … about what might have been.

Lewis had just one ‘blemish’ on a phenomenal career.

At primary schools’ level, he had never been able to beat Terrence Smith, a sprinter from Heathfield High, whom many described as a ‘once-in-a-lifetime’ athlete. But Smith’s sprinting career ended almost as soon as left school for university.

And from then on, there was just one king, Lewis, who easily swatted away the challenges of a host of pretenders.

Out of school, school, Lewis won the SAAAB junior men’s sprint double when the championships were held in his hometown, Paarl, with his victory in the short sprint coming in a record 10.8 seconds.

The following year, he shattered the 200m record in Durban. And when the championships returned to Paarl in 1976, he smashed the 100m record, winning in 10.5 seconds. He also won the 200m in 21.6 seconds to complete a fine sprint double (which persuaded the former champion, Ismail Collier, to retire).

With this victory came the belated accolades: Lewis, said those who knew a thing or two about sprinting was on par with greats such as Gareth McLean, Collier and John Wippenaar. Another Great, Mohammed Paleker of Belgravia High and Spartans, a top sprinter of the 1970s, believed he was even better than the others.

‘Edmund was the best at the time,’ he said. ‘There were others, but he was the best. He was excellent.’

In 1980, the Cape Herald newspaper described Lewis as the ‘finest sprinter in the country’.