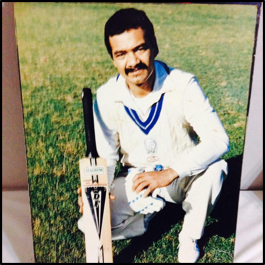 THE way Fagmie Solomons tells it, in the family home in Dorp Street, Bo-Kaap, there were two special rooms – a music room and a ball room … and they were meant to be sanctuaries of temptation.

‘My mother loved music,’ he says. ‘Her brother, Yusuf Allie, a flamenco guitarist played with the Greek singer, Nana Mouskouri, for many years, and also co-wrote a song, ‘Before’ (with Frank Kinsella) for another Greek singer, Demis Roussos.

‘She wanted me and my brother to play in the music room.

‘From a young age, I lived for cricket, football and rugby,’ he says, adding that he had a flair for any ball game. ‘One day, an old toppie in the street gave me the name ‘Fluffy’ because no one could stop me.  He said I could slip through anything.

At the age of seven, in Sub A, Solomons went to watch his school, Schotsche Kloof Primary play a match.

‘When one of the Schotsche Kloof players did not turn up for the game, I begged the sports teacher, Juffrou Edwards, to put me in the team, even though pupils were only allowed to play from Standard One onwards.

She reluctantly said yes, and I had to turn my grey school pants inside out to transform it into a white shorts, but I was in the match – and we won.

‘The next day at assembly, she told the school what had happened – and said I was the best player on the field.’

Over the next few years, Solomons began excelling in two sports: rugby and cricket. But it could have been more: he was also an excellent table tennis player. When he was 10, he became a regular in the Ottomans Cricket Club’s Under-16 side. In rugby, at the age of 13, he captained a Western Province Primary Schools XV that played in a curtain raiser for an SA Cup match between Western Province and City and Suburban.

‘At high school I was 15, when I was selected for Western Province Under-19s to play in a tournament in Durban,’ he says.

At the same age he began playing first team in both rugby for Young Stars and cricket for Ottomans.

At 17, those who knew the game, predicted he was on the cusp of greatness when, at the instigation of their strongman president Noortjie Khan,the Green Point-based Western Province Rugby Union selected him as the scrumhalf understudy to the great Cassiem Jabaar.

And his rise to the top was as fast in cricket, captaining a provincial team containing star players such as Lefty Adams, Braima Isaacs and Rushdi Magiet.

Solomons, who captained the SA Rugby Union in four games, says his proudest achievement was leading WP in their centenary year in 1986, the year they won the SA Cup.