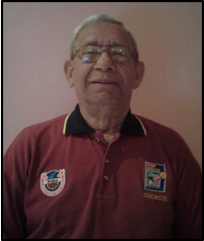 George Cottle was a “professional” darts player even before he knew it. He was earning good money off his playing skills while his peers were still simpply enjoying the “social” occasion of his sports.

How did he do it?  Simple really. He gambled on his expertise to beat opponents in challenge matches at the local pub.  His skill kept his pocket loaded and allowed him to pay for his dates with the young girls.

Today, 82-year-old George claims it was  money he earnt to take his mother to the movies.  Later on, his skill at darts also helped him feed his family. He would play at the pubs on weekends, Friday and all of  Saturday.

It pretty much set him on a very successful darts career that has led to him being treated as a legend in the code and a highly regarded administrator.

Initially it wasn’t all darts. As a young man, George Cottle loved other sports.  In his early teeens, he played rugby for Thistles and he also participated and enjoyed ballroom dancing.

The Cottle family moved to Paarl when George was 13 years old. Fortunately, the family moved back to Cape Town three years later, a move that proved fortuitous for George.

In his late teens he started getting serious about darts when he realised he was very good at it and could make money out of it.

Every time he moved to a new house and area, he would play for a different dart club.

When he moved to Kensington, he played for Rio Dart Club. In Manenberg, he started his own club, the Cottledales” with his sons, Stephen and Greg, and nephew Greg Ladegourdie.

They later formed the Apex Darts Club. It was a very successful venture, and according to George, many aspiring young darts players wanted to play for Apex.

George Cottle went on to represent South Africa at the World Masters in London in 1975 and 1976. He also won the South African masters in Kimberley for two consecutive years.

He managed the Proteas in 1999 when the World Cup was held in South Africa, and in 2001 when it was held in Malaysia. In 2002, George retired from darts because the travelling was too much.