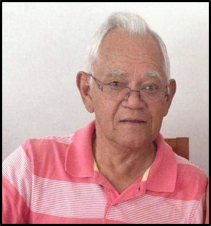 SUPPORTERS and opponents of Gerry Gooding always highlight three things when discussing his life and times: his height, his mouth and his heart … but not necessarily in that order.

Although short in stature, he played his favourite sports – baseball for St Andrews Dodgers and rugby for Perseverance – as if he was 3m tall.

He was a ‘talker’ of note too – and on the baseball pitch, especially, he perfected the art of playing a great game with non-stop running commentary.

But off the field – and, sometimes, even on it, another side of Gooding consistently shone through: in word and deed, he showed he had a heart of gold.

And this was why he was always so well-loved – as a player, spectator and member of the broader community.

Perseverance Rugby Club stalwart Cecil Lategan, who has known Gooding for many years says: ‘Gerry, Graham Petersen [another of tonight’s awardees] and I once played in the same Persies side. I think we were in the third team, and Gerry was our centre. He was a fiery character, a Cheslin Kolbe type of player, who relished tackling opponents far bigger than himself.’

Lategan also saw the compassionate side of Gooding: ‘Back in the day, when Gerry worked for Plate Glass, he was one of the few coloured guys who had his own office. And it was in his capacity as a manager that he organised jobs for an unbelievable number of people.

‘When players who joined the club from rural areas needed jobs, we’d say: “Speak to Gerry.”

‘They did, and he’d come through for them. It was common knowledge that when Gerry made a promise, he’d keep it,’ says Lategan.

Of course, it was a baseballer that Gooding shone. He started his career in a game that many would say he was born for, as a 14-year-old, in 1952.

Even so, it was not a lights and rah-rah type of beginning. He started as a bat-boy. But not for long….

In the same year, he was registered a player, and quickly made the central outfield position his own. At 18, he was called up to the Western Province side for the first time – and thereafter pretty much became a fixture in the team, with his best years being between 1965 and 1972.

His fast pitching became an important part of the offensive armoury of the side.

Later, he switched to manager and coach, and served as an umpire for more than 20 years.