Joyce Barendilla was destined to be a giant in a softball 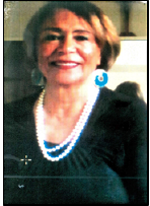 When sport is in your DNA, there isn’t much you can do about it. So it was in the Barendilla family.

Whether it was the brothers Colin and Geoffrey, or the sisters Joyce, Carol, and Jean, they had a pedigree that saw them excel at whatever activity they engaged in.

For the sisters it happened to be softball and Joyce was keen as mustard when she was first introduced to the game at the age of 13 in 1945.

With her sisters and the Welsh sisters, an aunt and a few friends they formed the Yellow Jackets Softball Club, named after a bee in the US.

According to Joyce, they “lived, ate and slept softball”, practising seven days a week.  Their home ground was the Maitland Sportsfield where they dominated before moving to City Park to continue their reign.

Their playing was of such a high standard that other teams came to watch them play to learn from it.

Joyce attributes the success of Yellow Jackets to a lifestyle that was determined pretty much by the matriarch of the family, her mother Kitty.  The girls never drank, smoked or took drugs.

“We were just a healthy, vigorous and clean-living bunch of teenagers who grew up in a healthy and lovely environment in District 6,” Joyce said.

The making of the stuff of legends! Eighty-five-old Joyce is as active as ever.