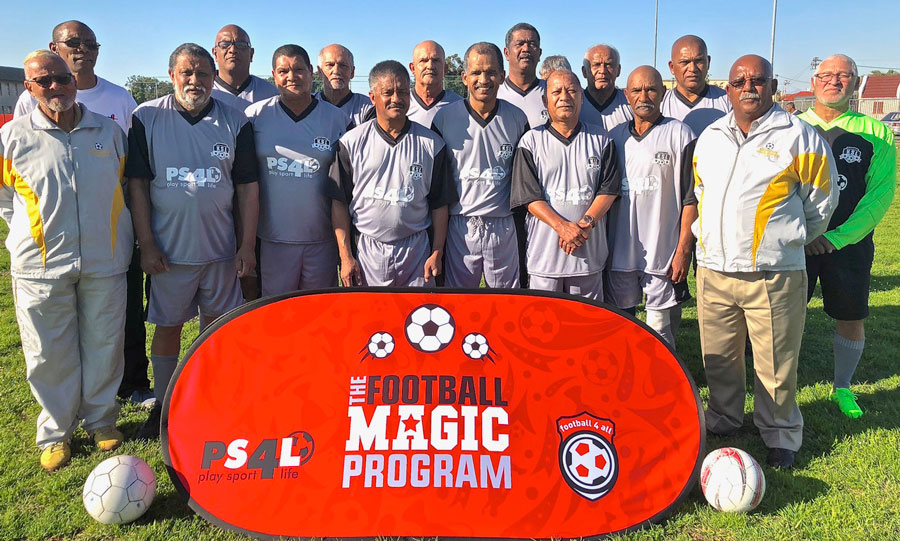 They may be well past their prime, but there’s no stopping the Kensington-Factreton Soccer Legends when they don their boots and shin pads weekends to play the game of their lives.

There isn’t a player under 55 years, and the oldest is in his 70s. But that doesn’t stop them playing with vim and vigour as they relive their glory days on the fields of Royal Road and Garden Village for the likes of Norway Parks and Saxon Rovers.

It was pretty much a loose, informal weekend gathering among kindred spirits. Now Play Sport4Life, along with branding solution company Streamline Agencies, has given it some structure by sponsoring the team with a new kit and equipment.

The head of Play Sport4Life, Miles October, said the community-based not-for-profit organisation was always looking for worthy causes that slotted in with their aim of promoting a healthy society through sport.

“At Play Sport4Life, we encourage the community be active in whatever way possible, and sport is the ideal vehicle,” October said. “Gender and age, doesn’t matter; as long as they are active and encouraging others to do likewise.

“The Kensington-Factreton Soccer Legends are good examples of ‘you’re never too old’.  Some of the old guys played without shin guards and boots – but they are keen as hell.

“We like their commitment and attitude and want to give them all the support to see them continue for as long as possible.”

October said the legends hoped the idea would catch on in other communities so that they could play a few challenge matches.

The manager of the team, Lester Carelse, himself a former WP player and WP Union Board Captain said the players looked forward to the weekend because it gave them some purpose and kept them in touch with the game they love.

“We play as hard as we can, and the bones creak a little after the match, but it is so much fun. It’s our World Cup game.

“Post-match we reminisce about the good old days, and now, with the World Cup on, everybody’s got an opinion. Some actually think they could make the Bafana Bafana squad.”

Picture Caption:  The Kensington-Factreton Soccer Legends team, which has been sponsored with a playing kit by Play Sport4Life and Streamline Agencies.  All players are over 55 and the two oldest are 70 years old.