IF YOU’RE a Barnes, your loyalties are expected to lie with the William Herbert-based Battswood Football Club.

It’s as simple as that. It’s the way it has always been – well, until recently.

When her grandson, Jarred, joined Stephanians, the club nearest to where he lives – Mavis Barnes, the ‘Battswood forever’ grandmom, says she joked with him, saying ‘Your Pa Richard would have let you have it,’ if he was alive today.

‘We’re a Battswood family. My late husband and all his brothers played for Battswood. So when Vincent and Colin came along, and when they were ready to play, it had to be for Battswood.’

Naturally, Barnes’s ties with the club had always been strong, but over time, when she noticed that many of the junior players were running around unsupervised at practices, she decided to do something about it.

The result was an even closer involvement with the club.

‘I went to a meeting and raised the issue of supervision of junior practices, she says. ‘They need a coach, I told them.

“But who?” they asked. ‘Well, I was a junior tomboy when I was young, and I often played football in the road with the boys. I knew a lot about the game.

‘That’s when I said: ‘I’ll coach them.” And that’s what I did. I don’t think many people thought I could do it. But I quickly began whipping the boys into shape. I even had them practising penalties. “Ooh, Mrs Barnes, why must we do this?” they’d moan. But I asked: “What are you going to do if you get a penalty? You would need to score if you want to win the game.”

What Barnes did was more than simply coaching the boys. On match days she would arrive at William Herbert at 7 in the morning and start planning the matches for the day. I even filled out the team sheets. It’s a big job. I was determined to ensure that the boys had an enjoyable playing experience.

After many years of involvement with the club, Barnes was forced to cut her activities with the club after her ‘knees started giving in’.

‘These days I have to get around with a 4 x4,’ she jokes, referring to the metal walker she now has to use. 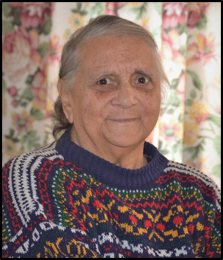 A few weeks ago she says she was in Wynberg Main Road when a woman asked her: ‘Mrs Barnes, when are you coming back to Battswood?’

‘It’s not going to happen.’ I replied. ‘I love football, but my health comes first’

Barnes says: ‘I’m still interested in the game – and I still ask how the first team is doing. Recently, I went to watch Jarred play for Stephanians against Battswood – and I enjoyed the match.’