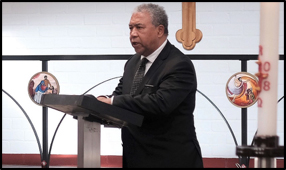 NORMAN ARENDSE – HIS LIFE AND TIMES

FOR all of his sporting career – as a player and as an administrator – Norman Arendse believed unwaveringly in the mantra of the South African Council on Sport (Sacos), of ‘no normal sport in an abnormal society’.

It was not surprising.

As a youngster, he had experienced the bitter taste of an abnormal society in the most fundamental of ways. ‘I grew up in Wynberg,’ he says, ‘on the wrong side of South Road. The consequence of the Group Areas Act on me, my family and other families in the vicinity were forced removals. In our case, we were forced to move to Belthorn Estate.’

From a sports perspective, Arendse began playing football at William Herbert prior to the uprooting of his family. ‘I played for Battswood,’ he says. Even at a young age, it was hard not to notice the influence the administrators of the Cape District Union had on how the game was played,’ he says.

‘They had some strong people, including the president of the union, William Herbert, and others such as Roy Wolhuter and Sylvia Jeptha.

‘After my family’s move to Belthorn, I came across more strong administrators when I moved to the Cape Union FA, among whom were Cecil Holmes, Red Damons and the Baartjies brothers, Vincent and Norman. It was, perhaps, inevitable that at some point Arendse would enter the world of sports administration. Not surprisingly, it started in football.

‘One day, when I was about 12, I was in a meeting in which the secretary didn’t turn up. The chairman turned to me and asked: “Can you write?”

‘I said: “Of course I can write. I’m already in Standard Six.”

The experience lit a spark, and he was still a teenager when he became secretary of Cape Union. ‘I was a player and an administrator,’ he says. It was a combination that continued until he was well into his fifties.

Arendse also served as president of the SAFA WP for many years. ‘Ironically, one of the biggest associations in this body is the Old Cape Town-Tygerberg , the former white union.

‘Today, they are the most racially mixed association. The threat of gangsters is a big problem in many of the township associations, he says.

As a cricket administrator, Arendse also followed a path travelled by giants. ‘Hassan Howa, Krish Muckerdhuj and Percy Sonn were huge influences in my life.’

As one of the people involved in cricket unity talks, he said the biggest mistake was the decision to allow SA’s immediate re-entry into international cricket. ‘There should have been repercussions for those who were responsible for isolating us in South Africa. This issue defined the split between Sacos and the National Sports Congress. We had a big fallout over the line the NSC took from the ANC,’ he says.