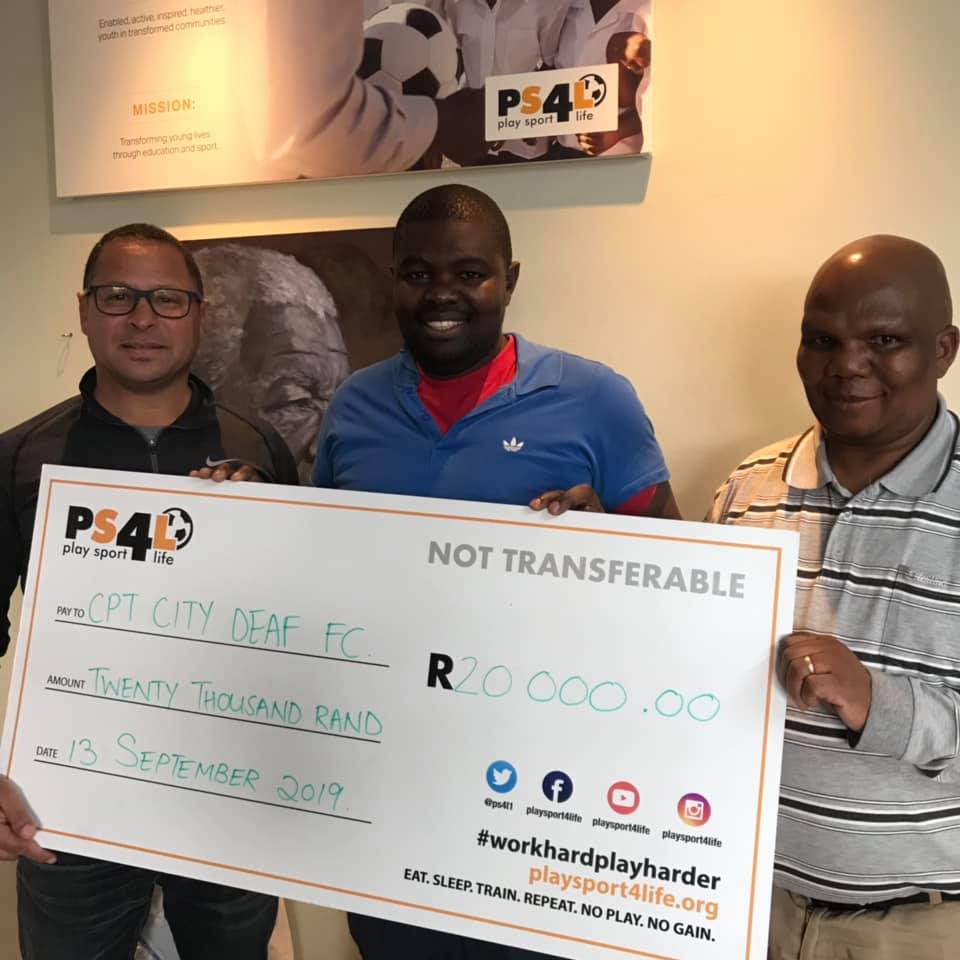 The Cape Town City Deaf soccer and netball teams have returned from Pretoria where they participated in a ground-breaking Deaf Awareness Tournament organised by Deaf Sport South Africa that attracted more than 200 players from across the country.

Although they did not win – the home team took both titles – the players performed creditably under extremely trying circumstances that began with the players struggling to even meet the cost of travelling to Pretoria.

Play Sport4Life came to the rescue of the players with a sponsorship of R20,000 that helped to cover the cost of travel, accommodation and food. The players were drawn mainly from the informal sector.

The chairman of the Cape Town City Deaf Club, Ndipiwe Masiba, said the teams were indebted to Play Sport4Life for making it possible for the players to participate in, for them, the experience of a lifetime. It also received help from Deaf Sport WC and Disability Sport WC.

“Without the financial support from Play Sport4Life, we probably would not have been able to give the players that experience,” Mr Masiba said.

“We had so many problems just getting to Mamelodi but we persevered, and our soccer players and the netball players did us proud in very trying circumstances.

“The netball players were without accommodation the first night, so we booked them into an hotel.  The next night, we were able to get them into a friend’s place. They did not have a playing kit and we had to borrow kits from other teams. That isn’t good. We still don’t have kits for them.

“The games were played in extremely hot conditions and our players were forced to play in the same clothes for the whole tournament.

“Notwithstanding the trying conditions our girls played in, we still managed to get three of our players selected in the deaf national team that will play in Lesotho next month.”

The founder of Play Sport4Life, Miles October, said the not-for-profit community-based organisation had no hesitation in sponsoring the deaf sportspeople.

“Ours is an inclusive organisation,” October said. “We treat the needs of players with a disability the same way we treat sportspeople who function normally.

“One of the primary aims of PS4L is for people in the community, particularly in the disadvantaged areas, to lead healthy, active lives and to be role models for others. The Cape Town Deaf players ticked all those boxes.”

The deaf club has launched the “Fly With Pride” initiative to build on the interest generated by the Pretoria trip.

Mabisa said they would target the underprivileged and informal sector to nurture the abundance of untouched talent among the youngsters.

October said the funding would also be used to train coaches and referees as part of the Deaf Sport Program.

“There is obviously a lot lacking in ensuring that the players lead lives that can make them feel part of the community and we would like to think that others will join Play Sport4Life in helping them achieve their goals,” October said.

“For a start, I’m sure there are clubs out there we have surplus netball kits that would come in handy for these players.  We would be happy to hear from you.”

For the record, the soccer players lost 3-0 to Tembisa Deaf and beat Hammanskraal Deaf 1-0.  The netballers lost in the semi-final.