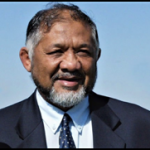 Rushdie Majiet was an imposing presence on the cricket oval. His opponents knew he could turn the match against them with both bat and ball.

He could keep the bowling tight – like when he sent down 44 overs for a paltry 33 runs and took three wickets to boot – or he could knock up a quick 50 to get the team out of trouble.

In 1972, he was player of the tournament at interprovincial level for both batting and bowling.

Rushdie was a late bloomer when it came to cricket. There was no such thing as working his way through the juniors because there was no organised junior or school cricket.

He joined Combine CC in ’68 (later changed to Primrose and in 1977 joined Cape and District Cricket Union.

His talent on the field did not go unnoticed and ended up playing in the UK’s Lancashire League.

When he came back he was told he could not simply walk back into the Board side – he had to play in a match to prove himself. He did prove himself. He took five wickets and scored 50 runs – but was still not selected to play.

His ultimate high though was when he was chosen in 199 to oversee the selection of the South African Proteas team.