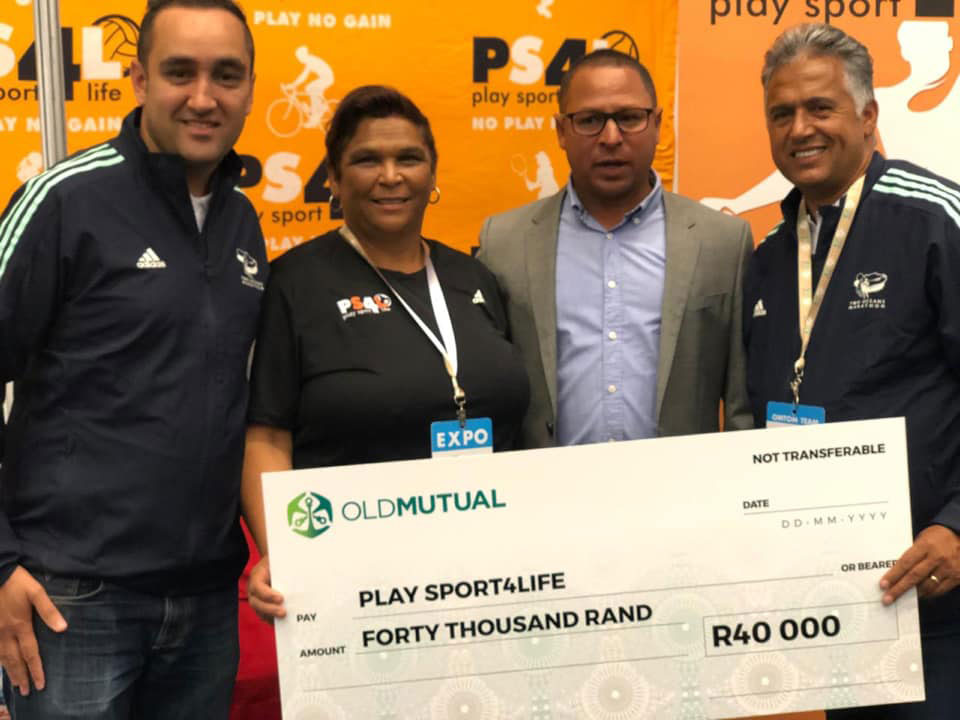 The Two Oceans Marathon NPC has recognised the sterling work Play Sport4Life has been doing in the disadvantaged Cape Town communities by awarding it a R40,000 grant to help with worthy projects.

The founder of Play Sport4Life, Miles October, was unstinting in his praise for the Two Oceans Marathon NPC in providing financial support not only for his organisation but also for other not-for-profit community-based organisations working in disadvantaged areas.

PS4L was one of only four not-for-profit organisations to receive cash grants from The Two Oceans Marathon NPC.

“We at PS4L can’t begin to tell you how much this means to us in terms of supporting our objectives in our community,” October said after the cheque handover.

“We work in areas that are riddled with gang warfare, drug abuse and domestic violence and there are so many vulnerable children who are exposed to this.  Our aim is to improve their situation through community-wide sports activities that can lead to a healthy lifestyle.”

In its five years of working among the poorer areas of the Cape Flats, particularly in Factreton, Kensington, Atlantis and Philippi, PS4L has run numerous sports coaching clinics, athletics meetings, and holiday programs for schoolchildren.

PS4L focuses on providing a service of physical education as part of the Life Orientation curriculum in schools.

“There is so much that needs to be done in these areas, but we are constrained by the lack of financial resources. Therefore, we are so thrilled with the Two Oceans Marathon NPC acknowledging the work we do.”

October said some of the funding will go towards helping talented baseballers in their travels to various countries to represent South Africa; the Norway Parks Magic Football Club will benefit through equipment for their teams; and PS4L will stage a community-based Fun Run for Factreton Primary School in September, as well as hosting events such as the annual PS4L Women’s Day to support and promote girls in sport.

“There are many worthy community projects that need financial support. Our aim is to develop and improve aspirations in the areas so that we can fight the ills that harm them and build role models for the future.

“We cannot do it on our own,” October said. “We appeal to corporate South Africa to follow in the footsteps of the Two Oceans Marathon NPC and support organisations such as ours.  We have a DONATE button on our website (www.playsport4life.org).  Hit the button and help someone have a better life.”